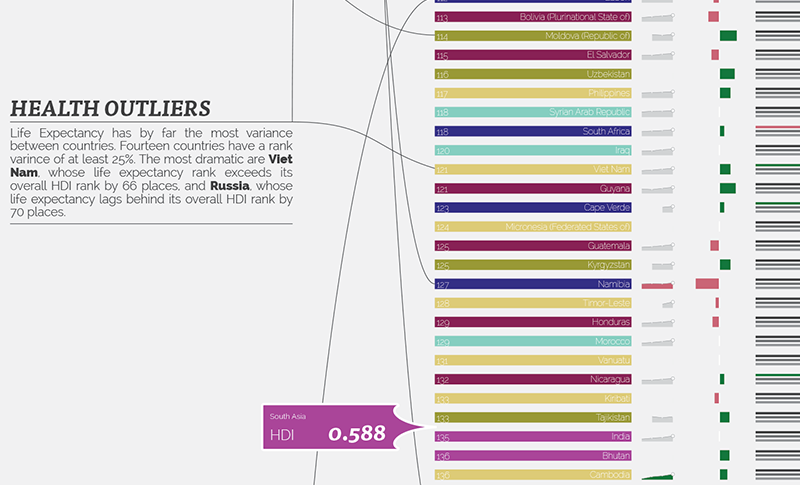 This score, which was most recently measured for 187 of the world’s countries, is an amalgamation of three primary measures – life expectancy, education and income. In addition to the HDI score, there is an inequality-adjusted HDI (which changes each country’s HDI based on the level of inequality in the country) as well as a variety of other measures.

I often will take publicly available data and do different projects based on this data. And recently, I decided to do two different experiments with the HDI.

In one project, I took the entire HDI and created an eight-foot banner illustrating the entire set of data. This project was particularly fun and interesting to me for a few reasons.

The second project was an interactive exploration of the effect inequality has on the HDI. This project was built using D3 and was the focus of a talk I gave at the HOW Interactive Design Conference in Chicago in October.

It is always particularly interesting to do more than one project based on the same data set. You can’t help but think about the data in different ways and come at it from different directions. In one, I did an illustration of the entire data set. In the other, I created a very focused experience based on one narrow aspect of the HDI story. And I look at this as a good way to approach everything I do, not just data visualization.

I strongly recommend you do this too. Regardless of your profession, try to force yourself to come at problems from different directions, trying different strategies and tactics for dealing with your challenges. Odds are you’ll come up with a variety of approaches, and even if only one of them is the BEST answer (odds are it won’t be that clear), you’ll inevitably get to that best answer as a direct result of your experimentation.